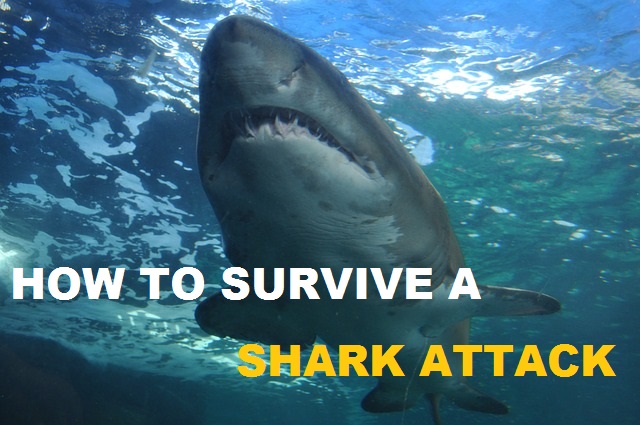 How To Survive A Shark Attack

Knowing how to survive shark attack should leave you marginally feeling safe whenever you enter waters that are known for having these predators. Despite “Jaws” however, shark attacks aren’t nearly as common. From 2006 – 2016, there were only 62 shark attacks reported worldwide, and only four of them were fatal.

Safety Measures to be Undertaken

Minimizing the instances of encountering a shark involves knowing when and where to swim.

First off, check if there are any posted warning signs that tell people that sharks have been spotted in the area.

Avoid river mouths and fishing boats since these attract sharks like magnets. Fishing boats in particular signifies a large quantity of fish which the sharks feed on.

Time-wise, you’d want to avoid early mornings or night time which is when sharks are more likely to be roaming around.

Peeing in the water produces the same effect as blood so hold it in until you’re out of the sea.

What To Do If You Have Spotted a Shark?

If you’ve spotted a shark – here’s what to do:

Obviously…you’ll need to keep your head when you see a shark. Quickly assess your situation and choose the best defense mechanism based on what’s available.

Some sharks don’t really care about divers and will usually ignore them. If they’re not showing any signs of attack, try to make yourself as small as possible. Curl up and slowly back away – using as little motion as possible. Do not thresh or splash in the water because this will only grab his attention.

Get Out of the Water!

This seems too obvious, but a lot of people actually get out of the water the wrong way. Do not panic, shout, and splash loudly on the water while getting out since this will only initiate frenzy.

Sharks are ambush predators which mean they’ll most likely attack when you’re not looking. Maintaining eye contact will discourage the shark from making a move.

If you’re diving, use a reef as your wall and keep your back to it. This obliterates the chance of an ambush attack and will make it easier for you to keep track of the shark. It doesn’t always have to be a reef – a stone wall or any large structure will do as long as it can keep your back closed off.

Playing dead only works on bears – with sharks, they’re more likely to attack. Remember, they’re ambush predators and playing dead means cutting off eye contact, making it easier for them to attack from practically any angle.

If the shark looks like he’s getting ready to attack, spread your arms wide to make yourself as big as possible. Size is a sign of dominance in the wild so this will instill a little bit of fear in the shark, if not fear. If the predator is unsure about whether or not to attack, this should discourage him.

Some shark attack victims don’t feel any pain. If you feel something brush up against your leg or any part of your body, immediately get out of the water and check your body for any sign of bleeding. Don’t wait until the attack becomes obvious.

How to Fight a Shark In Case You Get Attacked

The shark has decided to attack and goes for you! What do you do next?

Hit the shark in parts where it is most vulnerable. This includes the mouth, the eye, and the gills. Punch repeatedly – sharks won’t be discouraged by just one punch if they’ve decided on the attack.

Use Whatever Weapon is Available

Your hands and feet are great – but if there are any other tools nearby, don’t be afraid to use them! Aim for the eyes if you happen to have a stick or a dagger with you.

Don’t waste your time pulling your elbow as far as possible before punching if you’re underwater. The drag of the sea will only make the blow soft and will waste precious time in between punches. Hit close and hit hard in repeated motions – this should be sufficient to ward off the shark.

If the shark manages to bite, increase the aggressiveness of your punches. The gills are especially sensitive because this is where they breathe – bruises and pain on this area will make it harder for the shark to maintain their hold. Continue with this until the shark eventually lets you go.

The shark decided you’re too tough a prey and has decided to let go! Here’s what you should do next:

Get out of the water as soon as the shark moves away from you! Do it quickly while still keeping an eye on the shark. Second attacks are unlikely but not impossible so do not feel comfortable until you’re completely out of the water and on dry land.

Use pressure on the bleeding to prevent it from spilling on the water further. Blood can convince a shark to come back for an attack since you’re already weak and therefore unlikely to fight off too much. Use whatever covering you have on hand to protect yourself from the cold. Blood loss coupled with heat loss can shock the system and make it harder for you to recover afterwards.

Seek medical help as soon as possible to get the right treatment for the attack. Some sharks may tear off a chunk of the flesh while others simply pierce the skin or tear off the upper layer. Regardless of the extent of the injury, make sure you get all the proper remedies to prevent an infection.

Chances are the medical authorities already informed the coast guard, but it’s better to follow up with the information. This is especially true if the area doesn’t have any shark warnings and is a favorite for many divers and beach goers. This way, you’ll be sure that others will be careful or avoid the area to prevent other attacks from happening.