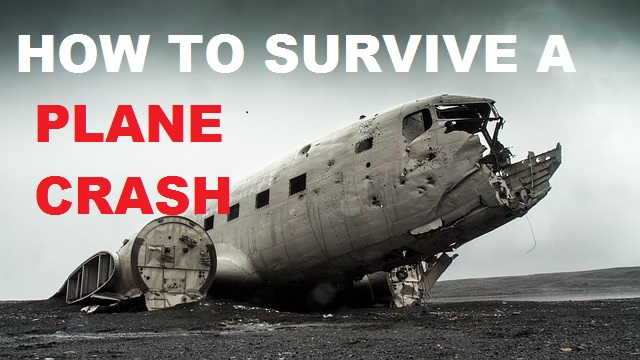 How To Survive A Plane Crash

Air travel is generally safe, but no one will blame you if you’re a little apprehensive when boarding a plane. A good way to alleviate some of your fear is learning how to survive a plane crash – you know, just in case something does happen.

The odds of dying in an airplane crash are 1 in 29.4 million. This means you are more likely to die in a car crash than in a plane. In fact, as of 2015 to mid-2016, there have only been three fatal crashes reported all over the world.

Keep Safety in Mind When You Prepare for Your Flight

Wear comfortable clothes and flat sturdy shoes when boarding a plane. This not only lets you enjoy the flight more, it also increases your odds of survival in the event of a plane crash. Comfortable clothes will not get caught in anything and the shoes allow for maximum movement.

Swap short skirts for a comfortable pair of jeans. Planes can be cold so bring a smoke hood that can double as a jacket in the event that the plane catches fire. You never really know how, when, or where a plane will crash, but these clothes will keep you safe somewhat whether in land or in water.

Unfortunately, not that many airlines let their passengers choose their seat. However, if yours does allow you to pick, always go for the seats close to the exit. If the seats near the exits are already taken, opt for the aisle seats so you’ll have a clear path towards the door.

Prime spots are obviously the seats near the emergency door, but be prepared because passengers nearby are usually tasked with the job of opening it in the event of a crash. In case something does happen, you need to keep calm so you can open the door.

When the flight attendants go through the pre-flight safety reminders, you need to pay close attention. You might have heard them many times already, but you should still listen. Here’s what you should keep in mind:

How to Survive a Plane Crash

Although the chances of being in a plane crash are small, you really don’t want to discount the possibility. In any case, knowing how to survive a plane crash gives you the mental security to keep calm during a flight:

Preparing for a Crash

There’s the “plus 3, minus 8 minutes” rule in plane crashes which you should know. According to this, the first 3 minutes after takeoff and the last 8 minutes before descent are the most precarious parts of the flight. More than 80 percent of plane crashes occur during these time frames so be vigilant! Do not relax until the 3 minutes has passed and prepare yourself during the descent. Keep your seatbelt on.

There are two types of brace position. One is resting your head on the back of the seat next to you and bracing your feet on the floor. The other is to bend completely at the waist while keeping your feet flat on the ground and your hands tight in your body. Either way, the brace position can help protect you from a jarred landing on the water or on land. If you have children, protect them with your body as you assume the safety position.

Assess the area after the crash. Quick recovery is vital at this point because you’ll have to pay attention to the surroundings, the extent of the damage, the reaction of the attendants and the instructions for a safe exit. The initial shock and confusion will always make you react slower than usual; even a simple task as taking off your seatbelt will be difficult if you’re in a panic. To prevent this from happening, before the plane takes off, practice putting on and taking off the seatbelt. Keep practicing until you can do it with your eyes closed.

Exit as soon as it is possible to do so. The job of flight attendants is to direct and assist you through the exit procedures so pay close attention to them.

Generally, it’s advised to forget about your luggage and just save yourself. In water landings however, it’s ideal to grab a suitcase or any device that you can use as a floatation device. Quickly head for the exit but don’t get too far from the plane itself.

Pilots and attendants generally have the capacity to call for help as soon as possible. In most cases, the pilots will inform the control tower of any problem so they can dispatch emergency teams immediately. If this doesn’t seem to be the case however, mobile phones are there to help. In the event of a water crash, try your best not to let your mobile phone touch the water and call the emergency numbers as soon as you can.

The most important thing that you need to do to survive a plane crash is to keep calm. Even if you memorized all of the safety procedures mentioned by the flight attendants, you will forget everything you learned once panic starts taking over.