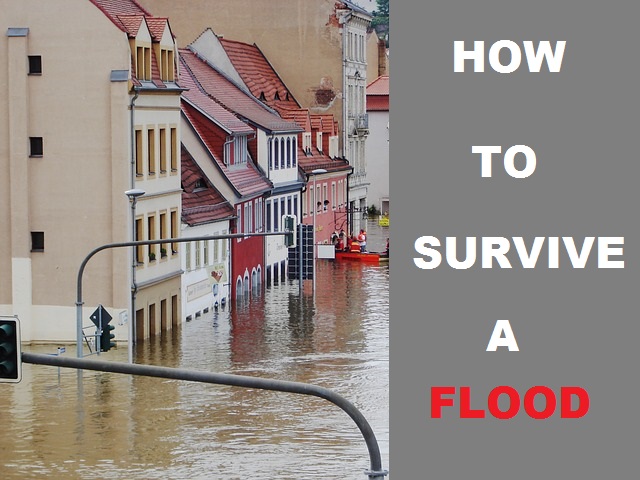 How To Survive A Flood

As it stands, flooding and flash floods are among the most lethal and costly natural disasters.  In fact, almost ninety percent of all damages that are caused by natural disasters in the United States are due to flooding.

The reason why flooding is so prevalent is because of the great number of ways that it can occur: tropical storms, melting snow, dam failures, intense rainfall, and so on are just a handful of the different causes of flash floods.

Floods are also incredibly destructive because they carry uprooted trees, rocks, and debris with them that can inflict even more damage on human settlement such as buildings, homes, and cars.  What’s more, is that the aftermath of a flood is very prolonged as waterlogged houses and buildings will need to be cleaned out and debris picked up.

With these things in mind, it is very important that you prepare for a flash flood so that you aren’t caught off guard and can save your life and as many of your most valuable possessions as possible.  Let’s look at the steps that you should take before, during, and after a flood:

What To Do Before a Flood

The very first thing that you should do to prepare for a flood is to put together a basic flood survival kit that gives you and your family the immediate necessities you need to survive.

Examples of items that you should include in your flood survival kit include plenty of cash (since banks will likely not be open for many days or weeks), at least three water bottles per person and water purification tablets, non-perishable canned food items, a knife, a battery powered radio that receives NOAA weather alerts, a space blanket, rain gear and rain boots, a first aid kit that includes prescription medications, a flashlight with batteries, keys for your home, and toiletries/personal hygiene items.

These items should be stored in a backpack that you can easily carry with you.  Rotate the food and water out once every six months.

If there’s one rule to natural disasters, it’s that they will strike when you least expect it.  Therefore, since your family’s survival is your top priority, you need to plan ahead so that each family member is warned of the incoming flood ahead of time, has a means of getting in touch with you, and that you have a rendezvous point to go to after a disaster.

The best source to use for finding out if a flood is incoming is going to be the NOAA Weather Radio All Hazards, which is simply a network of different radio stations that each broadcast information about the weather from National Weather Services.  Each family member must have a radio that receives NOAA signals.

As you probably already know, certain areas will be more vulnerable to flooding than others.  You will want to avoid these areas during the flood for your survival, and you would also be wise to steer clear of them during seasons when floods are more likely as well.

Flowing water will naturally move from higher to lower ground, which means that any low ground in your area is going to be more susceptible to higher water levels.  Low lying land areas such as these will tend to be closer to natural sources of water, such as lakes, ponds, lakes, or shorelines, where of course the water levels can even rise further in the event of a torrential downpour.  Identify all low lying land areas on a map and avoid them.

Finally, before a flood strikes you need to set an evacuation plan with your family.  You need to discuss where everyone will meet up in the event of a flood and how you will all get in contact with one another during the flood.

Set two separate evacuation routes to your rendezvous point from the various places where your family members may be, such as yourself or your spouse/significant other at work or your children at school, for example.

What To Do During a Flood

The dangerous thing about flash floods is that they are unpredictable.  It can be a warm and sunny day outside when suddenly a fast moving torrent of water flashes down the hillside and into your town.  This means that you’re going to have a limited amount of time to make the necessary preparations before you evacuate.

If you have any electrical units or generators that are sitting outside on the ground, those need to be brought inside immediately.  If you don’t, the water will ruin those devices upon impact.  The same goes for any fuel or oil tanks/containers that you have sitting outside as well.

Next, inside of your home immediately shut off the electricity, water, and gas.  Switch your radio on and listen to any information that the emergency officials put out.

Grab a change of clothing, your flood survival kit, your pets, and any valuable items that you can take and put them in your car.  Round up any other family members in your home and have them do the same, and get into contact as soon as possible with any family members outside of your home so they know to meet you at the rendezvous point.  If you have kids at school, pick them up as soon as possible.

Continue to listen to the emergency information on the radio for updates on the scale of the flood, where it’s heading, and any roads that are blocked off or clogged with traffic.  If the local officials put out directions on where to drive to, you would be wise to follow them.

You should avoid flooded roads both in your vehicle and on food at all costs.  If one of your evacuation routes is blocked off or flooded over, don’t risk driving through it.  Back up and switch routes.

Remember that all it takes is for two feet of moving water to carry a vehicle away, so even if a flooded area looks shallow, don’t underestimate it.  That same rushing water will also be carrying debris, rocks, and even trees that can inflict damage on your car as well.

You will want to get you and your family to high ground as soon as possible; hopefully, your selected rendezvous point is on a place of high ground outside of town.

What To Do After a Flood

After the flood waters have subsided enough for people to return to the homes, you’ll receive notification from the authorities over the radio.  The aftermath stage of the flood will now begin as emergency response teams rush to save victims and restore damaged property.

If the flood didn’t pass through your home, it might be safe to enter.  But if the flood did pass through, then you need to exercise extreme caution, because it is no longer safe to live in and won’t be until restored by a professional team.
First obverse the outside of your house and look for any notable outside damage.  Also get on the ground and observe the foundation of your home for any cracks.

Once local officials have inspected your home for safety, you will be permitted to enter.  Always wear a good pair of outdoor shoes that cover your ankles (avoid flip flops or sandals), and search for fire hazards such as a submerged furnace or electrical circuit.

Then, look and hear for any gas leaks.  If you smell something funny or hear gas hissing, open the windows immediately and contact your local gas company.  Finally, examine the floors, doors, walls, and ceilings for signs of damage or imminent collapse; if either is present, get out of the house immediately and contact the authorities.

Take photos of all damage you see on the inside and the outside, and then seek professional help to get that damage repaired.  If you need somewhere to stay and eat, the American Red Cross may provide shelter, clothing, food, and medical equipment.

All food and water that you had stored inside your house will now need to be thrown away since it can no longer be considered safe to consume.  Only turn on the power and your electrical equipment after your home has been inspected and approved by an electrician.

The repair process is arguably going to be the toughest part of the flood as a whole because it’s going to be a long and likely expensive process.  Everything that got wet in your home is going to need to be disinfected, and the sewage system is more than likely going to have to be serviced as well.

Floods are currently the most costly and common type of natural disaster there is.  If you live in an area where floods have been known to strike before, it is very important that you carefully follow the steps we have talked about so you aren’t caught completely off guard.

While it’s not going to be a fun experience for you no matter what happens, as long as you prepare adequately before, during, and after the flood, you’ll be able to minimize the shock and unexpectedness of it, and more importantly, be able to save the lives of yourself and your family.