Today, even the most familiar place and the broadest of daylight cannot guarantee our safety, let alone our security. A concealed weapons such as a tactical pen can be very useful for self-defense when needed. So what choices do you have and which one is the best tactical pen.

An ideal tactical pen is full of features that elevate it to a self-defense tool then further as a life-saving instrument. The one to buy should be well made, sturdy and inconspicuous

Overall, the best tactical pen must help you get peace of mind knowing you have a tool on you if you need it. Question to ask before you purchase one are – Can it save your own life and others in case of emergency? Can it inflict a blow to your attacker to ward him off but not a fatal one?

The following tactical pens may just be the answer to these questions. 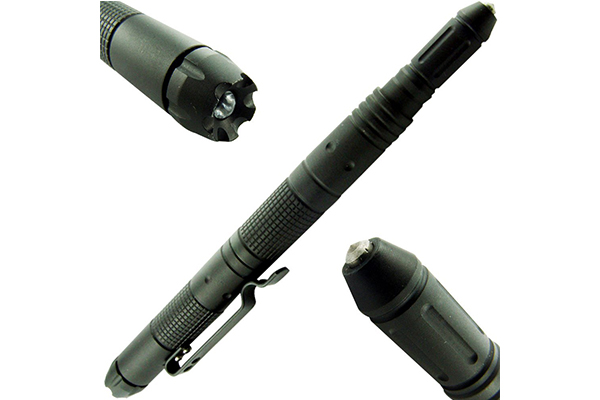 Under Control Tactical prides itself as one of the most trusted provider of military and tactical products in the country. The company claims to have delivered 95% of their orders within 24 hours.

Their brand of tactical pen promises to make up for the shortcomings of its competitors. It’s handy, well-built and sturdy.  Most importantly, it is designed for users to carry it around without inviting any trouble.

Primarily constructed with black aluminum, the pen is only 6.5 inches long. This means anyone can bring it anywhere. It looks like an ordinary pen, so no owner gets any kind of unwanted attention because of it. The pen also doesn’t disappoint in delivering its primary purpose. It is easy to control the pen, thereby making writing smooth and legible on any type and texture of parchment.

The pen’s end cap is jagged and sharp enough to hurt someone who obviously wants to do the same to you. When it has its cap on and used to hit someone, it quickly stuns the person and forces him to back off. It’s also equipped with a DNA catcher crown. Whether it’s your attacker’s skin or blood, the catcher can help police identify and pursue the DNA sample’s owner.

It features a belt clip, which makes it a highly-accessible cling-on tool. This gives you the advantage of immediately countering a person’s attack and preventing him to pursue another one. It also has a matte finish, which makes it a discrete self-defense tool, hitting the attacker when he’s off-guard. The non-shiny yet clean finish allows you to grip and hold the tool just like an ordinary ball point pen, too.

It comes with a glass breaker, which can shatter almost any type of glass. You can poke the fire alarm window with the pen’s screw-on glass breaker, instead of using your fist. If for some reason you get locked inside a car, hitting the passenger window with it can break the glass into pieces.

The LED light installation may blind an attacker for a moment, giving you sufficient time to escape or plan and execute your next move. In other emergency situations, the LED should be a sufficient source of light.

This pen is designed for those who don’t have any experience in handling tactical devices. You can use it to defend yourself from minor encounters and safety concerns where a law enforcer’s intervention is deemed unnecessary. 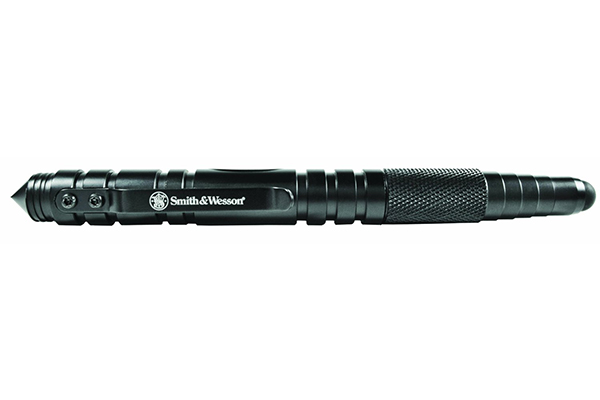 The oldest and the most popular handgun and cartridge provider in the world, Smith and Wesson is also known to offer stylish and multi-purpose tactical pens.

The more recent of its innovations is a tactical pen that can be used on technologically-advanced handheld devices. This is several notches up from the usual tactical tool, which only features a ball point pen.

Constructed with aircraft-grade aluminum, the pen only weighs 1.4 ounces. It is 5.7 inches long, which can easily fit in your trouser pockets, and in the smaller and hidden compartments of your bag. It also comes with a clip-on bearing the name of the company.  Make a statement by wearing it just outside your shirt’s pocket.

The aluminum used is anodized, which makes the pen highly durable and resistant to corrosion. Anodizing the pen also makes it a decorative piece.

The ball point pen can be used immediately just by twisting and pulling the cap off. Unlike other tactical pens, this doesn’t use a spring to engage the ink cartridge. It’s refillable with any color of Schmidt P900M cartridge from Parker, which you can easily find in specialty shops and office supply stores.

The pen’s stylus screws on and off the ball point end. This means you can prolong its lifespan just by removing and screwing it on the pen’s tail end.

Its solid metal finish allows you to break an ordinary glass even with just one strike. Both ends can also be used to hit an attacker.

It doesn’t have strong self-defense features, but it is a commendable entry level tool. It makes a great gift for techies and frequent users of handheld devices, too. 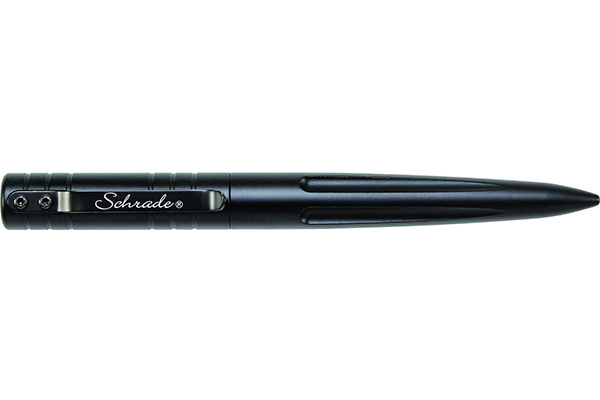 Since 1904, this company has been producing high quality tactical knives. In 2003, it began using unique design concepts that paved the way for some of their innovative tactical pens to compete head-to-head with the more popular ones.

Their latest aim is to become a traveler’s self-defense companion in unfamiliar territories while disguising itself as a regular ball point pen with just a sturdy body.

The 5.7-inch-long tactical pen weighs only 1.6 ounces.  Its aluminum body is made using CNC machines (Computer Numerical Control), which guarantees the pen’s concise construction and the even distribution of the material’s weight around its body.

The aluminum used to construct the pen is also anodized. It may not be as resistant to water, but it can outlast other metal-made tactical pens in the market.

The pen comes with a protective cap, which prevents the ink from blotting or drying because of exposure to air. The cap itself cannot be screwed on the other end, but you can push it there to lock it in place while you’re writing.

As a self-defense tool, it is designed to puncture the skin of an assailant. Simply rest your thumb on the flat tail end with your other fingers supporting the body. With the pen in this position, strike your attacker with the head’s pointed end.

This pen automatically comes with a ball point pen cartridge from Hauser Parker. Although this is the recommended cartridge, the pen can hold Fisher space cartridges, too.

The pen is designed as a secondary self-defense tool. This is recommended for those who travel a lot, but would like to use something as protection if the unlikely happens. 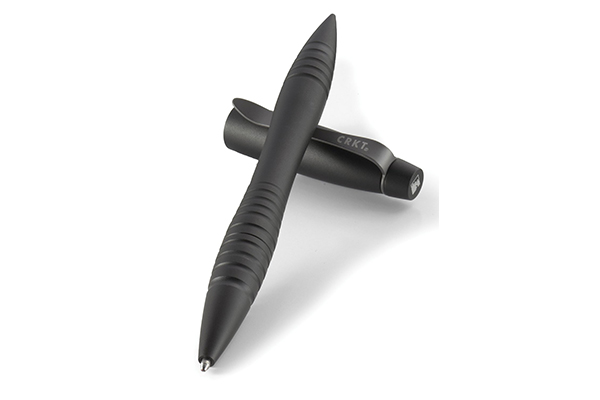 Columbia River Knife and Tools is a 22-year-old company that was first established in Oregon to produce tools, knives and accessories for professionals, athletes and survival enthusiasts.

The company employed James Williams, a martial arts expert and a military operations specialist, to design its latest tactical pen, which is an effective self defense tool as it is as a writing instrument.

The pen is constructed with anodized aluminum using precision machines. This makes it one of the cleaner-looking and more futuristic tactical pens in the market today.

The black finish makes it look more elegant than what the manufacturer may have intended it to appear. Because of this, it doesn’t encourage suspicious stares from law enforcement officers. This is particularly convenient, especially if you need to let it through the x-ray machine.

The body is tapered, which contributes to its contemporary look. This tapered design allows users to grip on it while writing or using it as a self-defense tool.

Fisher SPR4 refills can be used with the pen, making it a highly-flexible writing instrument. Owners can also replace the default cartridge with a G2 Parker-style ball point refill.

It has also been proven to break emergency glasses. Just strike the pointed part of the pen on the surface and it will not disappoint.

Lastly, it can be hand-carried pass the airport security without causing a scene. However, it’s recommended to keep the pen in its case to avoid darting looks from people who can be familiar with tactical pens.

This product is recommended for individuals who want to carry an innocent looking device, which can actually function as a self-defense tool when the need arises. 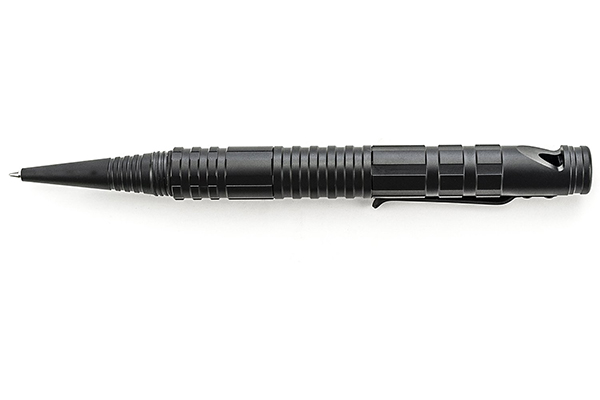 Taylor Brands LLC may have taken over the entire production and operation, but the legacy of Schrade Company lives on with them. The new management continues to produce high quality, military-grade knives and tools.

In fact, its latest tactical pen successfully incorporates unique safety and security functions that you can hardly find in other multi-purpose pens. A notable feature is the pen’s fire starter function.

Its body may also be made of the typical anodized aluminum, but this familiar material makes it one of the lightest you can own at the moment. It easily fits in your pocket or in a small knapsack. Although some of its parts may loosen with constant movement, you can re-assemble the pen in less than a minute.

Some may find it disappointing that the popular Fisher space refill is not compatible with the pen, but the more affordable Ministar D refill may be used to replace the ink cartridge that comes with it

It also features a threaded cap to protect the pen and its ink. In addition, the cap itself has a pointed part which doubles as a glass breaker.

Removable fire rods have also been installed in the pen. To start a fire, you simply remove the tail to reveal it. The striker is found just at the tip of the detachable tail.

The pen also comes with a whistle, which you can use to signal anyone of an emergency. It can also scare an attacker right away without the need to strike him. For a close quarter self defense, you may use the pen as a kubotan, a Japanese keychain-like weapon, which is known to be a decent striker and a force multiplier.

Tactical pens have indeed come a long way.  From a humble piece of writing instrument that you can also use as a quick self-defense tool, you may now use them to help with police investigations, escape emergency situations like getting locked in car or sounding the fire alarm.  Now that you have the information you need about tactical pens, it’s time to change how you deal with the unlikely and the unfamiliar.

Today, you don’t have to feel unsafe all the time. Instead of writing with an ordinary ball point pen then arming yourself with an excessively harmful hand gun, get yourself at least one of the multi-purpose tactical pens we presented you.