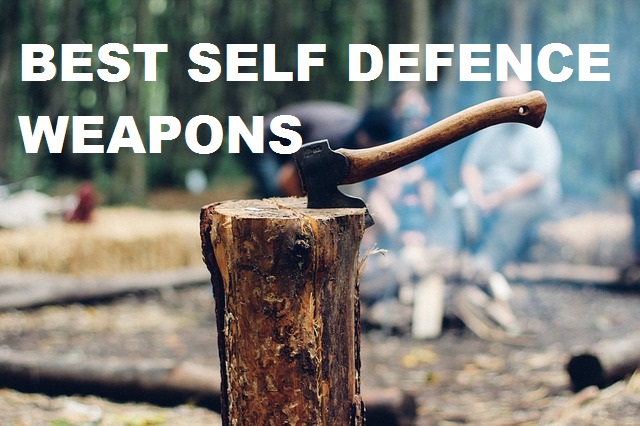 Guns may not be the best option for everyone and it may not even be allowed in some places. Learn about the best self-defense weapons to select a weapon that will work for you.

Below, I have categorized the weapons you can use for self-defense and explain how they are used so you can choose the one for your needs.

Types of Weapons You Can Use for Self-Defense

While it may seem like a glorified stick, the baton can be a devastating weapon if used correctly. The ability to purchase an expandable baton and carry it in a concealed manner makes this a great non-lethal self-defense weapon.

The key to using a baton is to strike someone where it will hurt the most. Your goal is to aim for areas like the legs and arms. You will inflict pain and potentially buy yourself some time to get away or gain control of the situation.

When looking to buy a baton, consider your needs. Do you want a weapon that is easily concealed? If so, then look to buy a smaller baton. If you’re not as worried about concealment, then you can go with a baton that’s a little larger. They generally range in size from about 16”-32”.

Much like the baton, the taser is another weapon widely used by law enforcement personnel. Tasers are generally shaped like guns and shoot out barbs connected to electrical wires that deliver an electric shock to a target. Tasers offer a bit more range than stun guns.

A taser can be a very formidable weapon when used properly. The trick is to understand how and when to use your taser. If you are going to fire it, make sure that you’re guaranteed to hit your target, because you won’t be able to reload the cartridge quickly enough to be effective.

A taser will require a larger initial investment than some of the other self-defense weapons on this list, but it’s a pretty effective weapon. It also has the benefit of allowing you to remain at a distance from an assailant and is pretty effective at rendering a person immobile.

If you’re looking for a more lethal option than the baton or the taser, a simple knife should do the trick. You can use a knife for a variety of everyday activities as well as potential self-defense scenarios. Additionally, knives can be carried in places where guns may not be allowed.

One thing to understand about using a knife for self-defense is that, while it is more lethal than other weapons, it will require a physical altercation with an attacker. As such, you should train to learn how to use your knife quickly and effectively, while giving yourself an opportunity to exit the situation as soon as possible.

Choosing a knife can be a difficult decision. If you choose a folding knife over a fixed blade knife, it’s important that the locking mechanism won’t fail. The last thing you want during an altercation is your own knife folding in on your hand. For this reason, many people prefer fixed blade knives over folding knives.

Tactical pens are similar to pocket knives in that they can be carried without alarming those around you and that they require you to get into a physical altercation with an attacker. Using a tactical pen as a lethal self-defense weapon will require a bit more skill, as it is not equipped with the slashing capability of a knife.

Nonetheless, a tactical pen can be used to provide lethal force if you strike an attacker’s vulnerable points. You can carry a tactical pen in places where even knives might not be allowed. And since you’re going to carry a pen anyway, wouldn’t you like it to be multi-functional?

Choosing a tactical pen can be a tough job if you’re not sure what you’re looking for. Consider what you will be using your pen for (aside from writing, of course). While most tactical pens can be used to either stab an attacker or provide blunt force trauma, some also have additional features, such as whistles or glass breakers.

Pepper spray enables you to incapacitate an attacker from a distance with a pretty high degree of efficacy when used correctly. Pepper spray can be bought in small, easily-concealable sizes and its value as a self-defense weapon is widely recognized and accepted.

Pepper spray should be sprayed directly at an attackers eyes. This is the method most likely to incapacitate the attacker. Understand that there is a risk of blowback with pepper spray, meaning that, as you spray, there is potential for wind to blow the spray back in your direction. So, when using pepper spray, spray your attacker in the eyes and get out of the area as quickly as possible.

There are many types of pepper spray out there, so choosing which one to carry can be a tough job. A few important things to focus on are range, spray pattern, and canister size. A longer range will enable you to stay further away from an attacker, but could potentially be harder to aim. The different spray patterns are stream, fogger, and cone. A larger canister size will be harder to conceal, but could offer more protection in a self-defense situation.

Keychain weapons are easily-accessible and can be used in close-quarters against an assailant. These weapons are generally small and are can fit into a pocket or a purse. All these make them very effective.

Keychain weapons are unlikely to be lethal, but can offer a significant amount of “persuasion” to anyone looking to do you wrong; they are generally used to strike or stab an attacker. That being the case, it’s important to practice using your weapon, since its use requires you to be in close quarters with an attacker.

Choosing a keychain weapon can be a daunting task. An important question to consider is this: what weapon would you feel comfortable using? For example: you may not feel comfortable with stabbing an attacker, but you are okay with striking someone who threatens your safety. If that is the case, then consider a kubotan.

Hidden/concealed weapon are great because they allow you to feel secure in your ability to defend yourself without alarming those around you. Pepper spray pens offer the same technology as traditional pepper spray canisters, but in a package that is small and discreet.

Understand that, because of their smaller packaging, pepper spray pens generally do not provide the same amount of spray or power as their traditional counterparts. You wouldn’t want to completely replace your traditional spray with a pepper spray pen, but the pen could serve as a backup or provide a bit of protection in a pinch.

Pepper spray pens generally all look the same. The difference is in the branding. You’ll want to purchase your pepper spray pen from a reputable brand. Two brand names to look for are SABRE and Police Magnum.

While pocket knives are generally a socially acceptable item to carry, sometimes it’s necessary to be as stealthy as possible. When this is the case, a credit card knife can be quite effective.

These knives are extremely discreet, but may require a bit of planning depending on the style you purchase. Some knives need to be folded into the correct shape before using. As with the pepper spray pen, it may not be prudent to use a credit card knife as your main means of self-defense, but it can serve well as a backup weapon or as a primary weapon when you need to “fly under the radar.”

Let me be clear: I am not a lawyer; I don’t even play one on TV. So this is not intended as legal advice in any way. If you are going to carry a weapon with the intent of defending yourself, you must be aware of the legality of doing so.

Before making the decision to purchase any weapon, make sure you do the proper research. Understand that using any weapon has the potential to seriously injure or kill another human being. While some option are “less-lethal,” they can still lead to the death of another person.

Making the decision to carry a weapon is not one to be taken lightly. Protecting yourself is a highly important matter, but using any level of force can put you in a precarious situation with not only the justice system, but your conscience as well.

I’m not going to get into the legality of carrying a self-defense weapon in every state, country, or even continent, but I will talk a little bit about self-defence weapon legality as it relates to two major states in the U.S.

If you live in New York, your options for self-defense weapons are limited at best. You won’t be able to carry a taser or stun gun, but you can carry pepper spray. However, your pepper spray must state on the cannister that it is to be used solely for self-defense.

New York’s laws regarding knife carry are pretty interesting. Basically, you are not allowed to carry a folding knife in New York City, but you can carry a fixed-blade knife under four inches long. However, if you carry any knife with the intention to use it unlawfully, carrying the knife is illegal. Additionally, if you are found carrying a dirk, dagger, or stiletto (which is legal), it is presumed that you were intending to use the weapon unlawfully, although you can fight this in court.

I’ll make this simple: if you live in New York, you should stick to pepper spray.

California’s laws on self-defense weapons are slightly less restrictive than those in New York. Like in New York, pepper spray is legal to carry in California; however, each can must contain 2.5 ounces or less of pepper spray.

Stun guns are legal to carry in California. As far as I know, the law does not differentiate between tasers and stun guns. This could mean two things:

Again, I’m not a lawyer, so I’m not sure which, if either, of these is accurate. Regardless, it’s helpful to be aware of these things if you are considering carrying a taser in California.

Tips for Using and Carrying a Self-Defense Weapon

Make an informed purchase. Do your research before you buy a weapon. Make sure you understand not only the function of the weapon, but its legality as well. You don’t want to buy a highly effective weapon only to find out that it’s illegal for you to carry and use.

Practice using your weapon. The best weapon in the world is useless if you do not know how to use it. It’s important to not only know how to use your weapon, but to also feel extremely comfortable using it, because in a fight-or-flight scenario, you won’t have time to think.

So there you have it. A complete list of the best self-defense weapons. You can carry any of these and know that you’ve got a formidable arsenal for anybody who wants to do you wrong.

Do you have any experience with any of these self-defense weapons? I hope that you’ve never been in a situation where you’ve had to use any of these, but if you have, we’d love to hear about it in the comments section.